I was watching TV a bit ago and playing with my model wind turbine from my fluids class and was having a good time playing with aliasing. From there, the obvious answer to my problem that I didn't really have was to build a stroboscope. This little tangent has resulted in a stroboscope capable of measuring rotational speeds from 577 to 30,000 rpm. 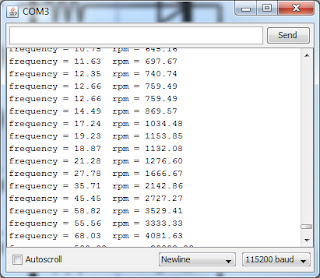 Before I get too far into the code and such, a brief description of a stroboscope is in order. A stroboscope is essentially a pulsed light at a known frequency. when the frequency of a rotating object matches that of the stroboscope, it appears to stand still. It is possible for the object to be moving at a multiple of the strobe frequency as well. for more info check out the interwebs or something.


My Arduino was already set up with 6 LEDs connected to ports 3, 5, 6, 9, 10, and 11 so I used that as a starting place. Since I don't have any drivers or expertise yet in dealing with led/lcd displays, I decided that the serial out would work for taking measurements.first I started trying to use the tone function, however, the 50% duty cycle was not adequate for my needs. The next step was to use a time based funtion that would be independent of the time it took to run the code. This was solved using millis(); however this did not produce adequate results as will be discussed later.

A potentiometer was used to control the strobe rate running off pin A0. all 6 LEDs were used as brighter is better. The basic circuit is about a follows: 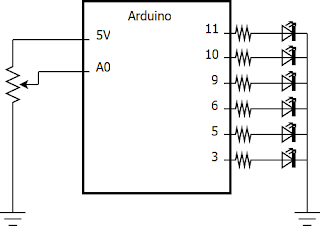 What really makes it tick is the code. Its split into 2 sections because if you use only millis(), resolution at high speeds is terrible. I then tried using only micros() but then the lowest frequency was 31hz or about 1800 rpm. I split the code so that for high speed, it uses a version based on mircos() and low speed uses millis(). This split allowed for good resolution to about from 9.7Hz to 300Hz.
In terms of displaying the speed, I used a simple serial output to read the strobe rate as well as the rotational speed in rpm. To avoid delaying the program unnecessarily, the speeds are only reported 5 times per second. I had also noticed that having the serial port set to 9600 baud would cause errors in code execution. In order to handle data transfer, the baud rate was set to 115200. With the higher baud rate, everything seems to run smoothly.
Overall it was a neat little project that could prove to be very useful later on. Here is a little video that kind of shows it working, though that is a bit difficult to convey. It would have been nice to have an accurate stroboscope for some of my other projects, and now that I do essentially have one, I'm sure it will find some more interesting uses.
I have included a video  that somewhat shows it working, but for best results, you would actually be using it. That and the video that my camera takes is horrid...
Its pretty cool, It even has a variable delay for how long to leave the LEDs on so it always will produce a sharp image with a constant brightness.I was quite surprised at how well the arduino was handling the math for how sensitive it was.

If anyone has an idea of something else cool to use it for, don't hesitate to mention it =]
And obviously some code =]

Mista Sparkle
Have degrees in Theatre Production and Mechanical Engineering. I also like toys...